Upcycled Drawers to Side Tables

We rescued some large mid century drawers and turned them into bright side tables.
2 extra large drawers, 8 little legs, and some scrap wood. The legs were attached with blind nuts and a wood shelf was added. A couple coats of paint later and bland drawers become bright accents. I chose to leave the original handles on to keep the mid century feel, two sets of legs were used, although they didn't match exactly, we trimmed one pair and the slight miss match adds to their charm and uniqueness.
*Due to many questions I am adding more info here after original publishing. We attached the shelf with wood glue and brads (thinner headless nails) and the legs are attached with blind nuts- available in most hardware stores.
*** added after original post This set of little drawers has really made the rounds. Since being posted they have been seen all over the web and Pinterest. They even made it into Mary Janes Farm magazine! I was contacted from another publication to feature them and asked if I could redo the project to have a new look and staging. The second set has been completed and a blog post has been made to feature them. They will be published in Sommerset Home's Feb 2017 edition!
Follow projects, tips and fun finds on www.facebook.com/junkflirt or on Instagram.
**see the blog post here http://www.asouthernbellewithnorthernroots.com/2016/12/upcycled-drawers-times-two.html
Finished in Duck Egg and Cream with flower and bird house stencils, these are now cheery side tables.
*also added after original post, one reader suggested stacking- this was a project from last year. Drawers are fantastic pieces to work with!! Thanks for the overwhelming support on this project!! 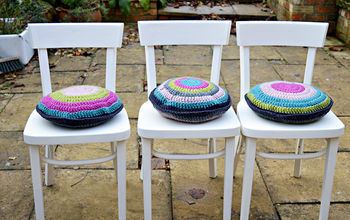 Hey everyone!Karen and I weren't quite done with our house yet, and one of the things we needed was...

Constructing the mancave and craft studio in the basement has been a long 2+ year process for hubs...

Ghost Lamp Shades.... I Have Been Told.

When I picked up these 2 ghost lamp shades(that's what someone told me what they are called. I...

Had an idea and went with it. This a wire spool, all in all between sanding and tearing apart skids...

A few years ago, someone gave me one of those plastic coated pressboard made-to-look-like-wood...

I have these 3 drawer storage containers several places in our home. Sometimes I like that I can see...

Something easy - that won't get broken either

How to Refinish a Vintage Desk--BEFORE and AFTER

Sign up here to join our weekly email newsletter! ​

Create a ‘Bee Happy’ Wreath to celebrate gardening season and in honor of Earth Day.

How to Make a DIY Floor Pouf

Once upon a time I made a DIY floor pouf.Many feet have been happy resting on it.My kids have rolled...

Celebrate the special Mom in your life with a beautiful handmade Mother's Day plaque that she simply...

How to Make a Photo Banner | Decorating With Photos

Get the steps to create a photo banner to decorate for your next celebration. Photo banners are...

How to Make Teeny, Tiny, Mushrooms for Your Fairy Garden

In my humble opinion, no fairy creation would be complete without the addition of a few teeny, tiny,...

I'm currently in the process of renovating our kid's small playroom. Last week I finished this EPIC...

I love wooden bowls and pedestal stands. I figured why not combine my love for both into one piece!...

To help with storage for our country cabin kitchen, I decided to make a hanging pot rack to match my...