Putting Your Home Back Together After an Accident

Three weeks after we moved into our new "forever" home, downsizing by half to 1700 square feet, we got a frantic phone call from our oldest daughter that there had been an accident at our new house. She was at work at the restaurant "The Slurp Shop" she and her husband own. One of the neighbors had tracked her down (our daughter lives across the street) by phone to try and reach us. We were attending a parade about 40 miles away, watching our granddaughter march with her soccer team. The only information we had, was that a car had hit our house, after losing control in the parking lot next door. Since the weather was mild, the parking lot is a church parking lot, and the police didn't think there wasn't any serious damage, we waited to see our granddaughter march past before hurrying home. It was dark when we pulled into our street, but, the street was full of emergency vehicles! Much to our relief, they were there because of a gas line leak at the house across the street, next to my daughter's house, and the area was being deemed safe and clear. We were allowed to walk to our house from where the street was blocked, while everyone finished their jobs. We walked along the side of the house that had been hit, and could see a large dent in one window frame, a couple of loose pieces of siding, and the demolished section of fence she had gone through. The driver was backing into the spot in an SUV, hit the gas instead of the brake, ran over the concrete parking curb, went through the chain link fence, over our sidewalk and hit the side of the house, according to the police report.

The good news? She missed our HVAC which had been installed 5 months before, our gasline and meter which is just to the left of the HVAC, our chimney to the right of the HVAC. Doesn't look too bad, except for the fence, does it?

This desk (and is very heavy) once belonged to my Grandfather, and was against the wall when the house was hit. This is where it ended up. That's my monitor on the floor. My mother's mother had given me a depression glass sugar and creamer, which I had just unpacked, and left sitting on the desk. They were on the floor when I walked in. By some miracle, they didn't break! The wall was not so lucky.

You can see where the sheetrock residue is on the corner of the desk.

The frame was knocked out of alignment, but, amazingly the window which is less than a year old, didn't crack. The seal seems to be intact on the double pane glass.

The cracking was on both sides of the window extending across the wall.

Sigh! Be sure to also notify the insurance company of any other property damaged. Our monitor took a hard hit, so that was covered.

It used to be all smooth and pretty!

Amazingly it didn't even crack the siding.

A crack also was later found in the ceiling, so be sure to check everything. The building inspector (yes, an important thing in the recovery process) found no structural damage, thankfully. We had just had the house inspected top to bottom prior to the closing, so we knew we had a solid house. Everyone was amazed that this 1930's structure hadn't ended up with the SUV IN the house! Thanks to the plank structure, and the 2x6 framing, it kept it out. The SUV had to be towed.

Make sure a police report has been filed. We had the officer return the next day to take additional pictures to document all the inside damage. You will need that report for your insurance company. The building inspector checked the structure the day of the accident to insure the house was safe. Many houses are condemned after a house vs. SUV collision. Our house came out the winner in this one (and us). The first call we made was to our insurance company. They arranged for an adjuster to appraise the damage. It sucks, but, most of us have a substantial deductible. That will be your cost while the insurance companies deal with each other. Otherwise, you will not be able to get the work done, until they settle, if you can't come up with that amount. It doesn't seem fair, but, that's how it works. Our insurance company is confident they will get the money from the other company, but, it takes time. Meanwhile, it's getting cold outside, and we have a draft in our new house, where it used to be nice and snug.

We are using a company who are certified reconstruction specialists. They guarantee the damage will be gone and it will look like it did. You see, that was easier for us to document because the house had been gutted to it's exterior plank walls and completely redone, finished just a couple of months before we made an offer for it. It had just been inspected, and we had the 40 some page report from that, complete with photos. A good argument for keeping photographic evidence of the condition of your house BEFORE disaster occurs, especially with major improvements.

Just for comparison, this is a picture I took while we were moving in. I love the exposed ductwork, don't you? The contractor starts tomorrow, so I'll post part two as the work progresses. Just remember: make sure there is a police report that tells the whole story if your home is damaged by someone else; that you have a building inspector make sure the home is safe to stay in if the house is damaged; call your insurance company so you know the steps they want you to take to make sure your claim isn't delayed; use a licensed, insured contractor for repairs, and take pictures every step of the way. Remember, a larger deductible saves you money on your policy, but, make sure it's an amount you have available to you if something bad happens! Stay tuned! 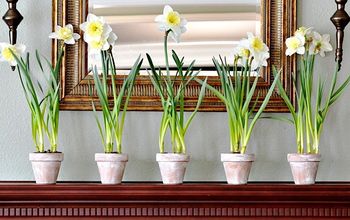 Fixing a Crack in a Wall or Ceiling

Did you know that fixing a crack in some drywall on a wall or ceiling can be quick and easy? We have...

How To Fix Torn Drywall Paper

We've all been there.
You want to repaint a room in your house. You remove the trim, but maybe...

Part 2 of Putting Your Home Back Together After an Accident

Part 3 of Fixing Our House After an Accident

In Part 2 of Fixing Our House After an Accident I gave some insight into repairing the damage from a...

Some photos of my front porch ready for Fall :) For more photos, please check out my blog!

This project is an easy and cost-effective way to temporarily insulate your windows. We're loving...

From an Open Concept Space to Closed Concept- Building a Wall

When I purchased my home a few years ago I was excited for the large open space that the room...

I wanted to create something cute for my cocoa bar. And i needed something to display there to stir...

Do you have a narrow table? If so, finding a centerpiece that doesn't overpower the table can be a...