4 Materials
$20
1 Hour
Easy
I found the most beautiful shower curtain at Urban Outfitters, but the price just wasn’t in our budget. So, I decided to make my own version for a fraction of the cost.
For the shower curtain, I purchased a white twin sized flat sheet from Walmart. The width was just right for our shower, and I cut the length to 78”. My husband is tall, so we have our curtain rod slightly higher than most people.
I found the macrame garland on amazon, and completely forgot to snag a photo before I attached it to my curtain.. but this is their stock photo 😊😅
Next, I placed our shower curtain liner that we have on the top of the sheet and used it to mark where the holes to hang it would go, and cut the wholes. You will need to have a shower curtain liner to go under this shower curtain. The sheet I used is obviously not water or mildew resistant as shower curtains should be.
Next I placed my macrame banner near the top of the sheet and sewed them together by hand. I secured it every few centimeters or so. The banner does have some weight to it, so it’s best to really makesure it’s secure.Once you’ve finished that, you’re done! So simple.
Here’s a before shot of our bathroom. We didn’t have a shower curtain, just a liner.
Here is an after shot with our beautiful new shower curtain!
Another before shot...
And AFTER!
Needless to say, I am in LOVE with it. It was such an incredibly easy diy, but made such a huge impact on the overall appearance of our bathroom.

Needle
See More
See all materials
Any price and availability information displayed on [relevant Amazon Site(s), as applicable] at the time of purchase will apply to the purchase of this product.
Hometalk may collect a small share of sales from the links on this page. More info 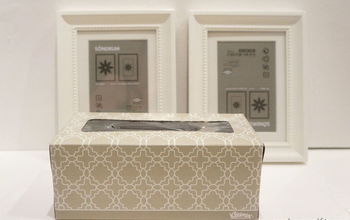 13 Storage Ideas That Will Instantly Declutter Your Kitchen Drawers

Hi, I'm Amber Oliver! I hope if you enjoy this project you'll also stop by my blog!Tearing and...

How To Paint Tile Floor (With Stenciling)

Are you wondering “can you paint a tile floor?” The answer is YES! Learn how to paint tile floor in...

I'm currently trying to find MY style for my home. I have very eclectic taste but also love so many...

Do you have an old shower curtain and don't know what to do with it? Here area few ideas I have come...

Make these outdoor cushions from shower curtains! Stuff them with screwed up plastic carrier bags...

I'm so happy with my latest thrift store makeover. I found these curtains a while ago at my local...

Turning a French Door Into a Shower Wall.

We are currently remodeling our major bathroom. Our home is 97 years old and through the 35 years...

How to Make Ikea Ritva Curtains Look Like Expensive Custom Made...

You don’t have to spend a fortune on custom drapes…I’ll show you how to make ready-made Ikea Ritva...

I have come up with a super easy way to make curtains, and for super cheap!

I believe we all want to make our homes beautiful and it can become very stressful at the cost of...

Wreaths can be so expensive at times. I'm going to show you how to make an easy, pretty wreath using...

These jumbo porch pumpkins will add farmhouse style to your porch! They're made from 2x4's and you...

Of all the DIY cleaners, laundry detergent is the one that I haven't wanted to do. I would start...

I had a bunch of glass vases and lying around that just weren't doing it for me anymore. So I...

Fall is just around the corner and that means crisp nights, sunny days and all of the fresh, juicy...