We've had a painted backsplash forever and on my honey to-do list was paint the kitchen, make new kitchen cabinet doors and install a new backsplash. The better half decided on a metal backsplash and I would call the style rustic or country I guess. Anyways, here is what we did to install a corrugated metal backsplash.

This is what I started out with, the old paint color and no backsplash except for behind the stove. I also add the arched piece of wood above the sink. It was just an empty space that my wife wanted filled in.

After some painting I was able to get started on this. The first thing I did was to add extension boxes on the existing receptacles so the plug would stick out the wall to be flush with the metal. Those are the blue boxes on the receptacles. You don't need to do this but if you don't you will need to build some kind of frame around the metal where you cut it out so it looks better. I bought those off Amazon and they were 1/2" deep. If using these, you will also need longer receptacle screws that are about 1-1/2" long, also from Amazon. Be careful when working with electric.

We got the Corrugated Metal from Home Depot. The sheets were 8' long by 2' wide and cost about $16 per sheet. These could be cut with Tin Snips or an Angle Grinder with cut-off wheel. You may even be able to use a Dremel Tool w/ cut off disk but that may take a while. After measuring twice, we laid out lines using straight edge and used a Scratch Awl to mark a line in the metal.

Here I am using Tin Snips to cut across the ribs. This not too hard to do, but when cutting the other way it is very difficult because you can't move the metal out of the way during the cutting process. An Angle Grinder is much better in those cases.

Here I am using the Angle Grinder with a Cut-Off Wheel to cut the metal where the receptacle will be. There's one of those blue extension boxes on the table.

Now we set the piece in place to make sure it fits.

I wanted this screwed to the wall in case we hang something on it so I measured and marked hole locations. I used a Spring Loaded Center Punch to make dimples in the metal so the drill bit wouldn't wonder around.

We then held the sheet in place and drilled 1/4" holes in the metal and through the wall. Be very careful to make sure you don't hit any electric wires. As you can see, we used a Vacuum to suck up the debris while drilling to make clean up easier.

Then we put Plastic Wall Anchors in the holes we just drilled and hammered them all the way in.

Now we could screw the metal to the wall using the screws that came with the Plastic Wall Anchors.

We kept doing the same process until both of our walls were done. The metal behind the stove goes all the way to the floor because the one side of our stove doesn't have a cabinet so it looks better this way.

This is another wall in the Kitchen with the new backsplash. We love the way it turned out.

One tip would be if the Backsplash is starting or ending in the middle of a wall, you should start there with your fist piece so you start out with a nice factory cut edge.

Hopefully this will give you some insight to do the same thing yourself. Below is a link to a video if your interested. Thank you, Steve.

There is a video of this project on YouTube, check it out!

Drill
See More
See all materials
Any price and availability information displayed on [relevant Amazon Site(s), as applicable] at the time of purchase will apply to the purchase of this product.
Hometalk may collect a small share of sales from the links on this page. More info 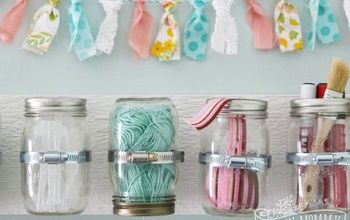 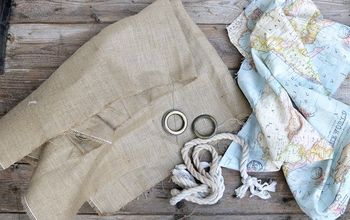 Why Everyone is Copying These Amazing Brick Paneling Ideas

What color should I paint my house??
Answer

What color of paint should I choose?
Answer

If your looking for an inexpensive way to upgrade your kitchen this DIY backsplash is a fraction of...

Earlier this year, I toyed around with tiling our "breakfast nook" and got as far as ordering...

I love our little apartment, but the kitchen was missing something.. I didn't want to damage the...

How To Build A Stone Birdhouse

Happy Tuesday from the Mitten!Today, I am talking about beach days and birdhouses!Yes, in this story...

How to Make a Tea Light Romantic Couple Candle Holder

HI! today i will show you quick and simple tutorial on how to make a romantic couple candel holder....

Do you want a cheap way to update your kitchen backsplash? How about for just $22 dollars? Here is...

Tiered trays are hot, hot, hot! They're so much fun to decorate with for any season. If you've got...

One weekend to an amazing kitchen renovation!Please note that the tutorial here is an abbreviated...

I’ve been a DIY’er for several years… and a blogger for…well, not nearly that long, so I have more...

I've always admired those colorful glass backsplashes in new kitchens. So when I moved into my new...

My husband found this eleven foot long rusty old steel beam in our woods and then we made a light...

I absolutely love having my home smelling like my favorite scents but I don’t like all of the...

How to Install a Wood Plank Wall

A big thank you to Timberchic for sponsoring this post! A few weeks ago I created a small man cave....

I don’t say hate very often . . . but friends, I hated this wall. It needed something. But there was...

This is the second barn quilt I’ve made for my porch. Barn quilts are a great way to add character...

I always love cloches! They are so much fun to fill with cute holiday items and this one is no...

Upcycled Mantel Shelf Made From A Dresser Mirror

This upcycled mantel shelf is a great example of how you can get the exact look you want for your...

How To Make A DIY Spring Pillow With Scrap Fabric

Y’all pillows are the easiest and cheapest way to update your spaces for Spring. You can completely...

Remember what my front patio looked like?You don’t?Could that be because I don’t show photos of it...

My son’s closet has always been a dumping ground for junk that really doesn’t serve a purpose. My...