So strolling through Dollar Tree, I ran across this cotton multicolored rope toy for dogs. I bought it thinking it would make really pretty rope handles for some project someday. By the time I got home, I had a whole new idea for Fido’s toy.

Dog rope toy before unknotting it

I started by trying to unknot it. Funny, because my dog could have probably figured that part out before I did. Apparently it’s knotted pretty tightly. I grabbed a letter opener( a butter knife would also work) and wedged it under a knot and started wiggling it around until I could actually loosen a knot. I continued to unknot the whole thing.

I think my dog would have liked a go at this

Once I got the end unknotted, the cotton rope began to unbraid itself . Not wishing for this to happen, I folded the unraveling part & put a rubberband around the end to keep it from unraveling too much. Once the dog toy was totally unknotted and both loose ends rubberbanded down, I got to work on my idea gluing the rope into a circle. ( My original idea was to make coasters) I quickly went from trying to make coasters, to deciding a little bowl thing would be fun to make instead.

I started coiling the rope to form a round coaster. Although it was taking a round shape, the middle of it made it kind of bumpy and I wasn’t comfortable putting a glass on it to use as a coaster. However, I thought it would make a great bottom for a small bowl type of thing. So I kept going and decided to start gluing the coil to itself and going upwards. The bowl was beginning to take shape.

Starting of my rope “ bowl”

Realizing I wasn’t going to get a very big bowl out of my 7 feet of rope, I changed my plan yet again. It was now going to become like a drink cozy thing or plant holder or whatever. I continued coiling and hot gluing every inch or so in an upwards fashion.

I’m liking this so far

I continued coiling and gluing until I was pretty much at the end of my rope. ( pun intended)

Almost out of rope.

When I got to the end, I still had that frayed rope issue going on.

This fraying wouldn’t do, so I twisted it, glued down what I could and cut the rest off to use for the top of my rope container.

Frayed part to use

Next, I unraveled the scraps of frayed rope I cut off and ended up with some fluffy rope bits. Those got hot glued on to the top of my rope container for a finishing touch.

Using all of the scraps

Once everything was attached and fluffed out a little on top, I dripped some hot glue into the rope container to kinda keep the bottom from coming undone.

I went from making boho coasters- to a boho bowl to a boho container. It’s all a learning process. The rope container can now be used to hold pencils and art tools, TV remotes or even to use for a plant. If you use it to hold a plant, be sure to line it with a plastic bag or plastic cup first.

I sure hope you enjoyed seeing how a dog rope toy from Dollar Tree became a soft sided pencil holder. The particular rope toy I used had 7 feet of rope once it was all unknotted. It made a rope container that is about 3” in diameter on bottom, stands about 4.5” high and has about a 4.5” opening at the top.

Scissors
See More
Any price and availability information displayed on [relevant Amazon Site(s), as applicable] at the time of purchase will apply to the purchase of this product.
Hometalk may collect a small share of sales from the links on this page. More info 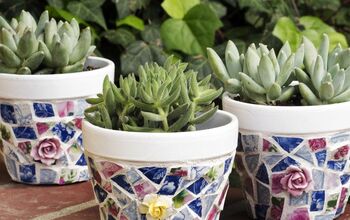 Turn Anything Into a Chalkboard With These 13 Creative Ideas

People Are Pinning These IKEA Rast Ideas Like Crazy

How To Make Fabric Baskets You Will Love

Here is a cute way to jazz up any gift. Check how to make fabric baskets you will love.

Picnic Basket From a Fruit Box

Simply build your ideal picnic companion yourself: Lots of space for snacks and once you arrive, it...

Today I want to share what I learned from making a coil rope storage basket. With any DIY project...

I wanted to make my little toilet cave a nicer place to er... be in. So I started by painting at all...

How To Make a Crate Desk

I've been dreaming of the perfect farmhouse desk to finish off my office. One day, I came across...

These linen fabric baskets are perfect for serving and storing bread, your favorite craft project,...

Disclaimer: This project uses eggshells. For health and safety reasons, make sure to clean eggshells...

I'm so excited to show you guys my new planter. I found this wool rug at the thrift store a store...

Hi Hometalkers! I hope all of you are enjoying at least some degree of spring and sunshine,...

Anni | Whose Idea Was It To Buy This House

Hey all you cool cats and kittens... sorry I had to. I’m sure everyone has heard that by now. 🤣 I...

Don’t you just love those little storage baskets you see in Michaels, Target and just about...

We always knew we wanted raised garden beds built with rocks. I am sharing how we built them and...

I love creating my own home decor, especially since I need a variety of different styles when it...

Lodi’s Room Reveal complete with New Light Fixtures! Starting at the beginning… When I renovated...

I love Spring! I also love items typically found outside like statues, used inside for decorating. I...

These easy DIY solar lights sit on solid plinths made from old wood blocks allowing them to be...

How to Stencil a Tile Floor to Look Like Faux Brick.

With no way to replace flooring, I decided to paint my tile floor to look like faux brick.We’re...

With Spring finally here, I was inspired to finally complete a project that I have considered for...

How to Upcycle a Dollar Store Container!

As a crafter you know that dollar stores are an incredible way to get so many crafty items at a low...

Celebrate the special Mom in your life with a beautiful handmade Mother's Day plaque that she simply...

Making a Lampshade Out of an Antique Sieve / Strainer

We are in our 3rd Lockdown and Stay at Home orders here in Ontario Canada and that doesn't bother...