When I found my house, the sunroom was one of the many reasons I fell in love with it. I could see the potential! Although narrow, it had enough room for a sitting and dining area. Enclosed with large screens instead of windows, you could easily enjoy the sounds of the waves coming off the lake. What's not to love?? Here is the before:

Step One: Remove what you don't want.

First things first, the carpet had to go! Underneath was decking that was in pretty good shape, just a few paint splatters here and there.

The beautiful cedar cathedral ceiling needed to be highlighted so we hung up some icicle lights. It really makes the outdoor space cozy at night! My husband had to put in a temporary light switch until he makes the sunroom bigger :) and can add switches. (so don't look at the wires hanging on the wall...)

We also replaced the two outdoor lights on either side of the door to go better with the theme.

Time to paint the wicker furniture I had found on road trip to Branson, MO. I love Branson! If you haver never been, you need to go!!

I thankfully have a paint sprayer which came in handy as I cannot imagine how much it would've cost to use spray paint in the can!

I really liked this set, just did not like the color. No offense against others that like green. Just not my thang, nor the look I was going for.

I laid down a large tarp and gave both pieces a first then second coat.

This was my first go at using a paint sprayer. I actually did not like it. I really liked the convenience of it, but it felt heavy and awkward.  Also, when you are not using your head and wearing flip flops, you will get a nice new pedicure for free!! Downside is your whole toes get coated too.

I love my sprayer now :)

And I learnt my lesson regarding proper attire when using it!

After two coats, it was good to go. The loveseat actually came with really neat looking cushions that totally went with my décor scheme but the couch did not. It came with dark brown cushions. In my infinite wisdom, I decided I would try bleaching them to hopefully get a lighter sand color. This was a noooo go! On to plan B. Cover it up with a white blanket.

Next was the dining set. This too, was found on the same trip. I could rattle on and on about all the goodies we found on that trip but to put it into perspective, we had to rent a 6 x 12 uhaul to bring it all back to Canada!! My husbands tetris skills really paid off, let me tell ya!

This was the set before.

I sprayed all the bamboo on the set including the table white. I left the cushions on as is and just recovered them with blue curtains I had. I just removed the screws that held the cushion in place, cut the material to size and stapled overtop what was already there. Very easy!

I also had an old metal end table with missing glass so we cut left over barnboards from our entryway wall to size and glued them to the frame. It turned out great.

Since there were 4 chairs and not a lot of room in the sunroom, I only used 2 and put the other two on the outdoor deck.

The red door did not go with my beachy look, so I painted it blue. Other than that, the only other thing that got painted was the trim around the patio doors!

I wanted to have some privacy in the sitting area so we just hung up some pewter curtain rods and as luck would have it, the house came with canvas type white curtains so I just used those. I don't have a picture of it, but I found a really neat coconut light in Mexico so we hung it right above the sitting area.

Step Six: Put it all together!

Most of the stuff in the sunroom is reused and repurposed. I love the thrill of the hunt and the challenge to make something useful and beautiful again. A lot of the décor I had already in the house so I just relocated it :)

Once all the furniture was painted/recovered/repurposed, I put it all together to try and create an outdoor oasis to enjoy my morning coffee while watching the wildlife go by or entertaining company with food and drinks.

I'm very happy with the turnout, I hope you like it too!

In the end, this refresh did not really cost a lot. I started the project off with an idea in my mind, I really wanted a space that felt relaxing and calming, like the water so I took my inspiration from there.

I took my time collecting furniture and things over the years and I don't think I would change that. In between, I used the space everyday in Spring through Fall and that gave me a good idea of what I wanted to use it for so when it came time to make the changes, I already had an idea in my mind of what it would look like.

I think if you change or decorate your space with things you like, or how you like, not what other people like, you can never go wrong!

Material for the cushions
See More

Barnboard shiplap
See More
See all materials
Any price and availability information displayed on [relevant Amazon Site(s), as applicable] at the time of purchase will apply to the purchase of this product.
Hometalk may collect a small share of sales from the links on this page. More info 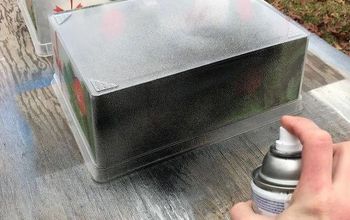 Different thickness or board in tub area?
Answer

What are these pieces used...
Answer

I have been on the hunt for this rocker for a few months now as I have a loft area in my home that...

Hardwood Wearing? Here is My Hack!!

We installed engineered hardwood in a dark hand scraped hickory in our new home 10 years ago. Over...

If you don't have a lot of horizontal space, going up the wall can double up your room...

How to Install a Wood Plank Wall

A big thank you to Timberchic for sponsoring this post! A few weeks ago I created a small man cave....

Make an Easy DIY Sculpture With Clay and Wire

I’m always on the hunt for random decorative pieces.I have a huge blue bookcase that I LOVE to style...

How to Add a Light Fixture Anywhere - 804 Sycamore

The cost estimate for this DIY does NOT include the price of the wall sconce. Every lighting fixture...

My husband has an enormous CD and record collection. Thousands of CDs. Our best friend (owner of a...

How I Made TWO Easter Garlands With Cheap Eggs!

You know I love my garland for every season and holiday! Here are two ways to make beautiful Easter...

Well, as it turns out table legs are expensive!I recently built a table from leftover oak parquet...

Happy snowy Sunday morning!We haven’t had a good snow in 5 years here in Arkansas so this southern...

How To Build A Budget-Friendly Faux Headboard

We’re knee-deep in our bathroom renovation. The cabinets and walls have been painted, and the lights...

My first cabinet build! Building a cabinet seemed way more intimidating that it actually was....

Here’s a fun DIY project for Spring!! Do you have any little resin or ceramic bunny statues around...

How To Make A Bathtub Caddy Tray With 1 Board

*This post is sponsored by GBC. All thoughts and opinions are my own*Shredders are a fantastic way...

Pringles Can Makeover for Kitchen Storage

I’ve always had a hard time throwing useful things into the recycling bin, when all it takes is an...

Have you ever removed a builder grade mirror? It’s not fun. Plus, the glue behind can ruin the...

I found a couple of vintage mirrors at a flea market about 2 years ago. And I decided that I wanted...

Vintage Plate Wreath for the Wall

Use your vintage plates to create a gorgeous wall wreath! I'm Cindy and I blog at DIY Beautify where...

If you love collecting and decorating with vintage windows then you are sure to love this very...

This DIY wooden serving tray is one pretty extreme makeover! If you scroll down you’ll see this...

I wanted to update my boring builder grade bathroom vanity.I painted it last year but was lazy and...

I have been seeing so many gorgeous faux trees online and everything costs a fortune! For the most...

I recently updated our sun porch on a small budget, and turned it into our own midwestern tropical...

My daughter needed a desk for her room as she is now school aged. She requested black and white...