by The DIY Playbook

Step 1: Get Plywood Cut Down (Free At Lowe’s!)
Shiplap can be a very cost-effective project because plywood is so darn reasonable! I used maple plywood and had two sheets cut down (in store… for free!) to 5 1/2″ strips. You can get your strips cut down (they called it ripped) to whatever size you want. I bought two sheets and had quite a bit leftover. For $24 per board, this stuff is a steal!
Rookie Tip: The plywood I bought is very light and flimsy and did do a bit of chipping when I cut it down, so if you want wood that’s a bit more sturdy, consider buying plywood that’s thicker.
Step 2: Cut The Shiplap To Size And Label
You don’t HAVE to do this step next, but I didn’t want to paint ALL of my wood since I knew that a lot of it wouldn’t be used. To identify exactly what wood needed to be painted, I pre-cut the plywood to fit every area in the bathroom.
The day I tackled this project, Matt was out-of-town and Casey was at work, so I had no choice but to do it all by myself. I would hold the piece of wood approximately where it would end up going on the wall, then I marked the wood and headed to the garage to cut it down with a miter saw.
Step 3: Prime The Walls And The Boards
After the pieces of wood were cut and labeled, I primed the walls and the boards. I’m not sure if priming the wall behind the shiplap is totally necessary, but it will save you from having to get a tiny paint brush into the little cracks after it’s hung. The same goes for the sides of the boards. Priming the front and sides of each piece before it was hung really saved me tedious painting work later in the project.
Step 4: Hang The Shiplap!
Since I already had all of the boards cut to size AND primed, all I had to do on day two was hang, caulk, and putty. The hanging of the boards took no time at all since they were all cut and ready to go.
We secured the boards to the wall by squeezing liquid nails onto the back of the board and then nailed the it to the wall at every stud. Once the first board was up, we simply placed the nickels along the top of that board to create a consistent seam, and then nailed on the next board (above the first). We used that same method all the way up the wall.
Keeping the nickels in the seam as we nailed the next board was a lot easier than I thought it would be. Once the board was secure, we pulled those nickels out and used them on the next board.

Caulk Gun
See More
See all materials
Any price and availability information displayed on [relevant Amazon Site(s), as applicable] at the time of purchase will apply to the purchase of this product.
Hometalk may collect a small share of sales from the links on this page. More info

Say hello to the updated powder room. It's a challenging space and my goal was to brighten it up on...

We wanted, no, we NEEDED a Bathroom Refresh and what better time to do it then while we're anxiously...

Give Your Wall a Lift With Peel and Stick

Walls boring? Maybe you live in a rental, or maybe you just hate the mess that comes with real...

How to Stencil a Powder Room Wall With Stencil Revolution

Our half bathroom was one of those “I started to give it a makeover and quit a year ago” projects....

I love finding old wood frames at the thrift store. Especially when they are wood. They make such...

Wallpaper is not just for walls, you can decorate loads of things with it. As many great design...

Tracing directly on glass using only a sharpie? Yes that's right, just a sharpie and... a steady...

I did it! I created another faux brick wall in our house and I love it even more than the first! I...

The elements of design that every room needs are color, pattern, and texture. But with so many...

Painting My Floors With Rustoleum

Hate your old flooring? Keep reading to learn how easy it is to give them a new look!Let’s Get... 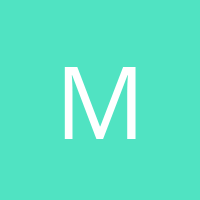 Are you embarrassed by your dated master bathroom. I sure was. I just kept the door closed and tried...

Before & After: A Little Black & White Bathroom Gets an Update

On to the vanity area! So, we had pulled the old, peeling wallpaper down, I washed down the walls to...

I Painted and Stenciled My Ceramic Tile!

Yes, I painted my ceramic tile floor and I am so in love with it, I can't stand it.A couple weeks...

If you’re a regular Dollar Store shopper (and aren’t most DIYers?), you know about those little...

Initially we were just going to change our dated bathroom up a little bit with a new vanity. But as...

Hey, so this is a first!The first time, that I’ve made a wreath I mean (all of the wreath tutorials...

As we head into our 4th week of being at home, here's me best attempt to distract myself and feel...

We are finally ready to show our finished DIY hallway reveal. The Peel and stick farmhouse shiplap...

Do you have some old T-shirts lying around? Did you know that you can make a soft and plushy rug...

A unique wall decor based on watercolour, water and salt The finished product

How to Build a Fun LED Lighted Headboard for Your Teen

My daughter was constantly using a flashlight to read in bed. I decided to make her something better...