5 Materials
$24
2 Hours
Easy
A micro-greenhouse I made for a gardening buddy out of picture frames and a craft box
shopping at Walmart for materials
A friend wanted me to make her a planter that looked like a mini-greenhouse. After seeing some great picture frame lanterns and lamps here on Hometalk, I knew just what to use for glass.
I removed the glass and backing from the picture frames
align the hinges against the frame
I drilled the edge of the picture frames with a 5/64" bit and installed two hinges along an edge. Note that I only used the outside screws, as not to interfere with the glass.
Hinges make a great adjustable bracket in a lot of situations, even if the finished product doesn't have to move.
I then installed two more hinges on the other side of each picture frame. These will attach to the craft box
To prevent any damage to the glass, I went ahead and marked and drilled the holes in the craft box for the bottom hinges before the glass was installed/painted
I then re-installed the glass in the frames and taped off the "Muntins" (or Mullions if you prefer) with masking tape. BTW the blue masking tape doesn't stick to glass very well, I would recommend trying the old school yellow stuff.
Brush the spaces between the tape, and the frames themselves. I used white acrylic chalk paint. Cover the hinges too. Don't worry about getting outside the tape, it cleans up easy with a razor knife/scraper
Remove the tape, and attach the frames back to the craft box using the previously-drilled holes. Now you can touch up any part of your window. I added some chalk paint to the craft box so it would look a bit more uniform to the window using a dry brush technique.
As hard as it was to mask the glass, I think painting the whole pane and scraping off the 'windows' might have been faster and easier. As far as the costs go, I already had the paint and tape.
I'm really happy with how this came out

Don't be surprised to see a cart near my front lawn with some re-purposed house windows attached in the same manner some time in the near future.

DecoArt AMERICANA DECORE 6 COLOR...
See More
See all materials
Any price and availability information displayed on [relevant Amazon Site(s), as applicable] at the time of purchase will apply to the purchase of this product.
Hometalk may collect a small share of sales from the links on this page. More info 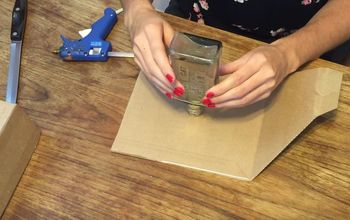 3 Gorgeous Ideas to Use Photo Frames - and Not for Pictures!
3 of 6 questions
see previous

Forget Your Traditional Christmas Tree, These Are Even Better

How to Build a DIY Greenhouse

How to Spruce up a Planter With Paint Pens

I saw a bargain large planter in a pound store recently and thought with a paint up it would be...

Mini Greenhouse From Old Windows That Changes With The Seasons

I've been wanting to make a mini greenhouse for some time now and I was finally able to procure some...

Looking for a greenhouse? Try this simple tiny greenhouse made from windows! Check out more DIY's by...

How to Build a Greenhouse

I have desired my own greenhouse to extend our growing season. And I’ve dreamed of just how to build...

Who loves Farmhouse Style? Who loves all things vintage? Okay, well how about who loves FREE stuff?...

How to Create Garden Art With Flat Marbles

I love old window & the possibilities! You can find them in restores, barns, flea markets, they're...

Looking to add more character to your backyard or curb appeal to your front yard? Build a wall for...

With our dream house build mostly out of the way, it is time to get back in the shop and make some...

Make A Silicone Concrete Planter Mold Using PVC Pipes. Add A Pottery-Looking Glaze!So not only can...

Are you looking for an upgrade to your planters or pots for your front porch or patio? Follow this...